Between the summer of 2019 and this summer, other North Carolinians and I have collectively written at least eight pieces with a total or partial focus on how North Carolina groups counties for legislative redistricting. But none of them have squarely addressed race. This post, published on the day the raw redistricting data are due to arrive, aims to address at least two ways that race can figure into the clustering picture.

[For a resource that provides links and context for most of the previous articles, see Chris Cooper's article from yesterday. And as was the case with my recent "limbo bubble" StoryMap, this post assumes a basic understanding of how the Stephenson process works.]

I am not an attorney. Nor have I run this content by any attorneys. So my interpretations here should perhaps be taken with a grain or two of salt. That said, my understanding of this landscape is informed by numerous discussions with attorneys in recent years.

Issues of race figure prominently in the Stephenson court decision

The Stephenson case from 2002 is the source of the method for grouping counties. And the Court's opinions document that provides the recipe mentions the Voting Rights Act of 1965 (aka VRA) no fewer than 70 times. Terms like "minority," "African-American," "race," "racial," "discrimination," and "discriminatory" can be found throughout.

The court's direction that legislators undertaking redistricting should not consider the recipe without regard to race is explicit. In fact, the section of the opinion that spells out the steps of the grouping process (pages 42–45 of this PDF) begins with the requirement that "to ensure full compliance with federal law, legislative districts required by the VRA shall be formed prior to creation of non-VRA districts."

Some readers may be thinking that the Stephenson decision predated the Shelby County v. Holder decision from 2013 which effectively removed the "preclearance" requirement from Section 5 of the VRA. While that is true, my understanding is that a redistricting plan could still be challenged under Section 2 of the Voting Rights Act if consideration of the voting rights of communities of color are not taken into account.

Section 2 provides that "states or their political subdivisions may not impose any voting qualification or prerequisite that impairs or dilutes, on account of race or color, a citizen’s opportunity to participate in the political process and to elect representatives of his or her choice" (this quote is taken from the Stephenson decision itself, p. 11).

As recently as November of 2017, the General Assembly's own online overview of the redistricting process, in the "What rules have to be followed?" section, stated the following:

First, the General Assembly should draw the districts required by the Voting Rights Act. Second, it should […]

Why then, haven't discussions of race figured more prominently when new groupings have been established in the past?

Determining whether districts (or county groupings that affect districts) comply with Section 2 of the Voting Rights Act is very hard, if not impossible, to do with an automated algorithm. It's not as simple as creating "majority minority" districts. In some cases, specialized statisticians are brought in to to assess the extent of racially polarized voting, which can involve extensive complicated analysis.

My understanding is that, in past cycles like 2011, what happened was that the optimal grouping (presumably generated with a race-neutral algorithm) was presented by the General Assembly. Voting rights groups then had the opportunity to challenge the clusters if there was concern that the clusterings didn't comply with the VRA. They could have, but they didn't—evidently because they didn't see those clusters as problematic.

But what if this time around, the clusters generated by the race-neutral algorithm are found to be problematic by voting rights groups? As best as I can tell, a challenge could be mounted based on a concern that the clusters didn't provide sufficient opportunity for large, concentrated communities of color to elect the representatives of their choice.

If the challenge was upheld, how would the clustering process then proceed? I don't know. My best guess is that problematic county clusters would be redrawn in a negotiated process, then an automated process would be used to cluster the remaining, unaffected counties. But that's only a guess.

There might even be a scenario without a challenge, where NCGA leaders on their own accord opt to depart from the automated "optimal" groupings because those grouping plans might allow for significantly fewer VRA districts than, say, the existing House or Senate plan. I should emphasize that this scneario is based on conjecture on my part.

Clever mathematicians have shown that the algorithm can (and often does) yield more than one optimal solution to the grouping puzzle. If there are multiple options, how will the NCGA leaders choose the one that ultimately is used? Unless I've missed some major proposals unveiled this morning, we don't know.

[This StoryMap contemplates one such scenario where decision-makers might be tempted to choose based on partisan preferences.]

As of Tuesday (I haven't checked today), the General Assembly had proposed a process where race would not be considered. But, as noted above, compliance with the VRA is required and necessitates consideration of race.

Each of the shaded clusters of counties above would make up one single Senate district.

The same Redistricting Data Hub population estimates included breakdowns by race, so I compared the racial composition of each of the theoretical districts above. I had hoped to provide some nice visualizations of the data, but don't have the time to finish them, alas. (Whose idea was it to release the data four days earlier than predicted!? =] )

Very briefly, the two options where the eastern district is yellow would have a green district where Black people are more numerous than White people. The other two options would have a green district with a White majority. Without getting into the intricacies of whether the latter two could satisfy the VRA, I will posit that considerations of the racial makeup of the different grouping options could sway the decision.

I could say more, but the release of the data is now less than an hour away.

Have I mentioned that I'm not an attorney? 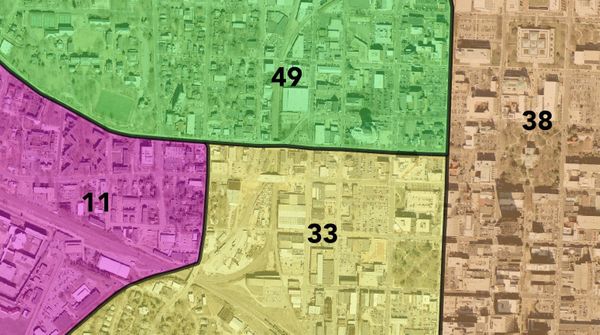 NC candidate filing is 12 days away—do you know where your districts are? These maps might help.